The last time I blogged, I got the best night sleep I had in a while, so I figured it was worth another shot at this blogging thing.  Sleep has been much improved lately, I’m happy to report.  I feel calmer, less worrisome, and more in control.  That could change at any second and any day.  That is just how anxiety is.  However, I’ve been on a streak of really good days, capped off by Sunday’s epic Packerpalooza 2014.  As anyone who knows me knows, I’m a diehard Green Bay Packers fan. I bleed green and gold.  Being a Packers fan is a big part of who I am and what I believe in as a person.  As one can imagine, living in Chicago, this has not gone over well with my family and friends. 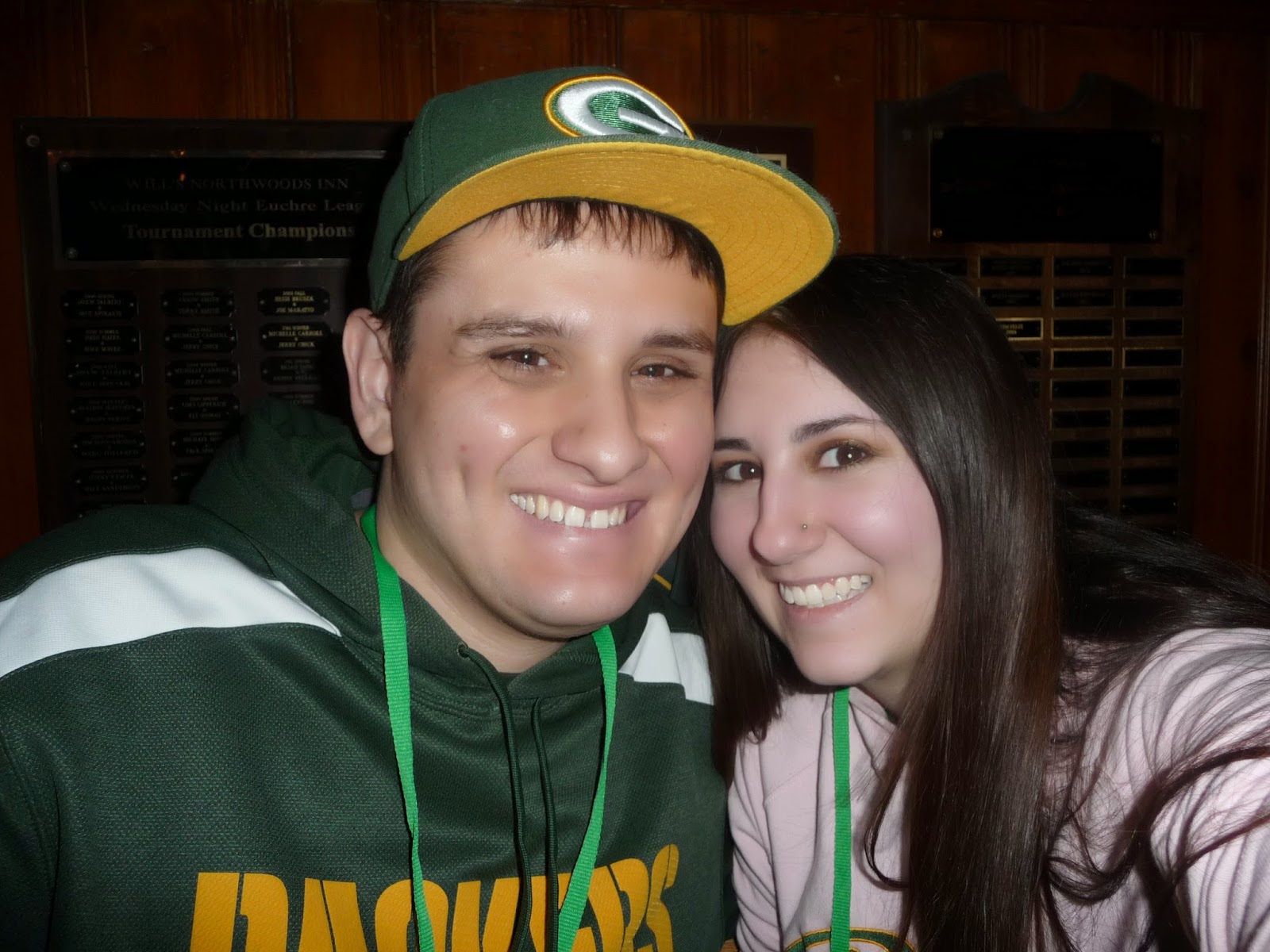 Because of this, Packerpalooza is something I look forward to dearly ever since I first went in 2013.  I was a little unprepared for last year’s event, so I made sure to make this year different.  I bought 8x10’s of John Kuhn, Frank Winters, and Jarrett Boykin ahead of time and also had a mini helmet that Amanda got me for Christmas ready to be signed by Scott Tolzien.  I wanted something special this year in terms of autographs, for them to be memorable and not just have them sign any old piece of paper.

For the past two weeks, it has been all I’ve been talking about and been thinking about, ask Amanda. I’ve become obsessed with the event, attending it, and wanting it to go off perfectly.  I’m glad to say that it did and then some.  It exceeded my expectations.  It started by having my bag filled with stuff to get signed.  Admission is $25 per person, which includes autographs and photos with the players.  Considering it’s four players, well, five as Myles White was a surprise addition, it is well worth the money. I like having the peace of mind of knowing I’m promised pictures and autographs.

I thought I would have a rough night sleep, but thankfully, Amanda helped me relax by shutting the lights off and making sure I stayed away from any screens. She gave me some great relaxation techniques to ease my body and slow down my mind.  I ended up getting around 9 hours of sleep, waking up only once, which was a big surprise for me. I thought I would be getting up early, tossing and turning, and end up restless.  I slept like a baby and woke up ready to start the day.  The water in the shower was warm and my Packer clothes were picked out from the night before, so I was all set to go.

We left around 11AM and got there a little before noon.  We found a good parking spot and my Iphone GPS got us there without any issues.  It was already pretty packed and I think the turnout was even bigger this year compared to last year’s, probably because they had more modern players attending the event.  We sat on bar stools which weren’t the most comfortable thing in the world, as the set-up had wood sticking in my back unless I wanted to stare at a wall, but that’s OK.  I was in such a happy and positive mood that a little discomfort wasn’t going to upset me. 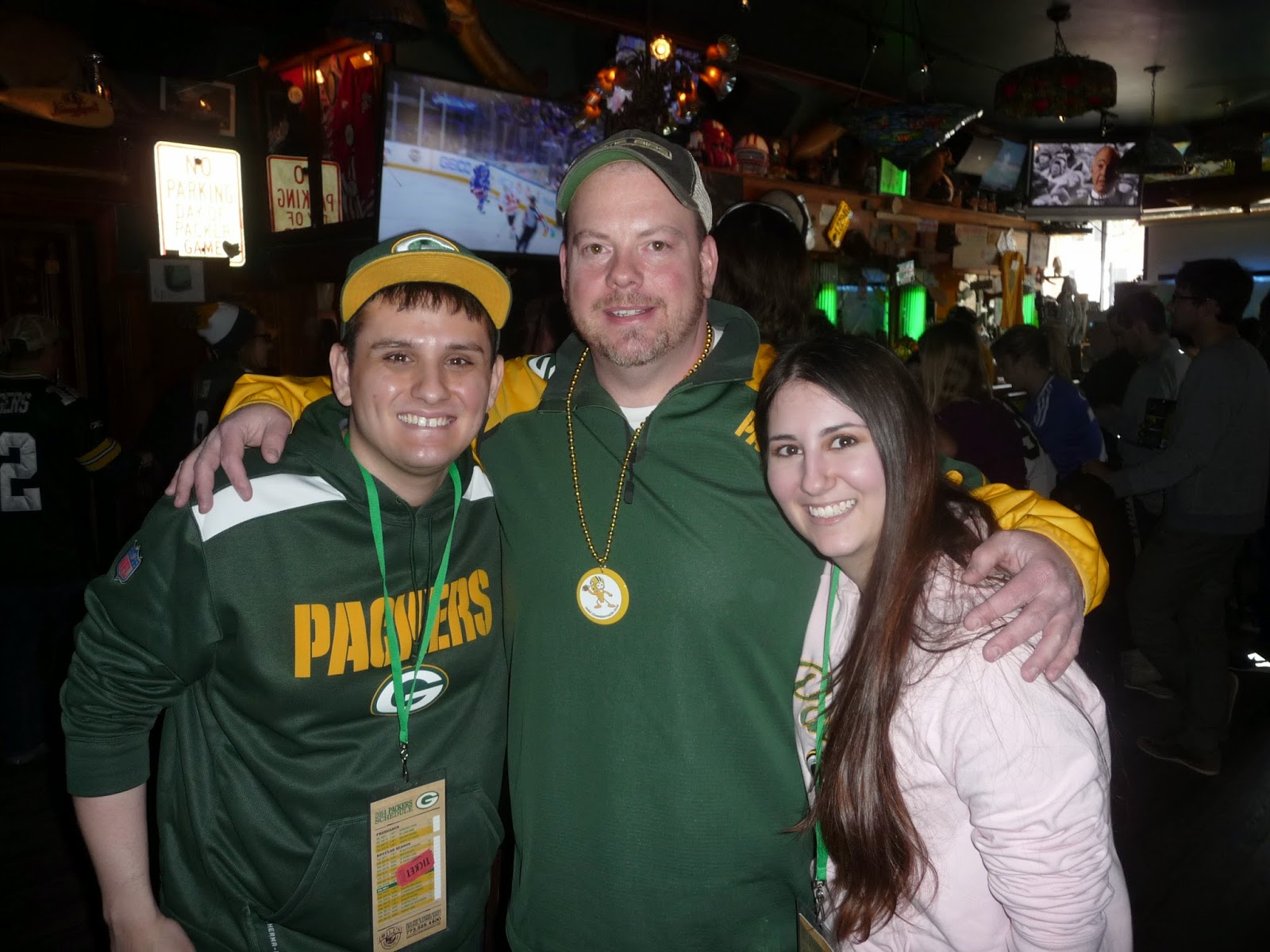 We got to meet the owner in person, Kevin Kruse. We have been Facebook friends for a while, so it felt like we were already friends in person as the conversation was perfect and he had a great sense of humor. We took a picture with him and he couldn’t have been nicer.  When we went to meet Scott Tolzien, Kevin told him that we were good people and to take care of us.  That meant a lot to me.  We also met the Ultimate Packer fans, including Mean Gene the Dancing Machine, who was dragging a bear along with him and stepping on it, which I thought was hilarious. We got to take pictures with them and hold up the Super Bowl ring and the Lombardi trophy, which was pretty awesome.  I bought my Packerpalooza t-shirt and settled in and waited for the players to attend. 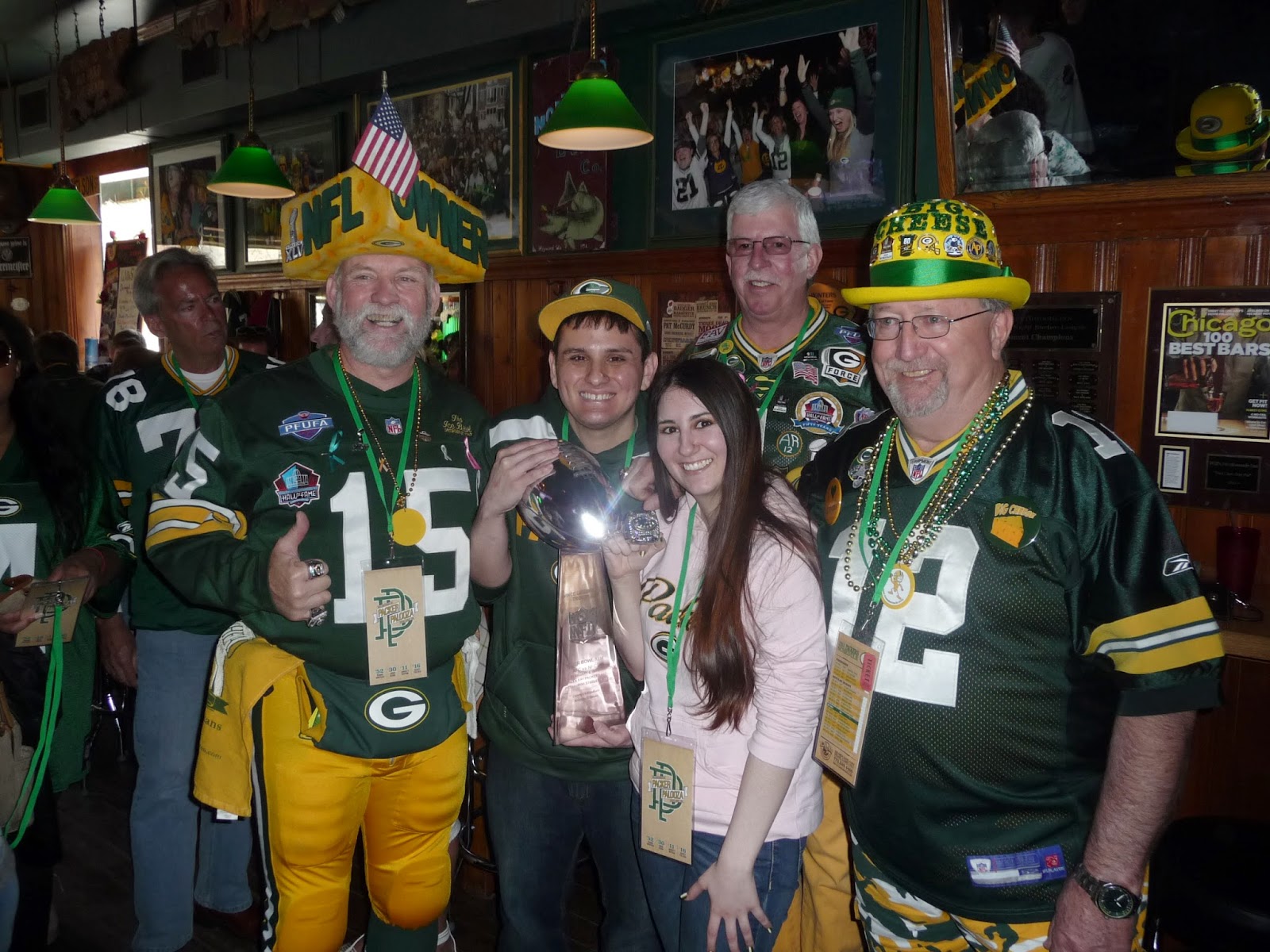 I wasn’t exactly sure when or how the players would be arriving, but I kept a look out for them.  Before I knew it, there was a long, long line and told Amanda that we better get in line.  At first, it seemed like the line wasn’t moving at all.  The Blackhawks game started at 2PM and people were watching that, getting excited when they scored a goal, and rocking out to the song.  I could never get into hockey, personally.

We probably spent a good 45 minutes to an hour in line, but the girl behind us was nice and shared a similar sense of humor as us, so that made time go by a little faster.  My feet were starting to hurt, but again, I wasn’t going to let that get me down.  I was determined to stay positive and I just woke up feeling like it was going to be a great day and believed it, one hundred and ten percent.  I did take an anti-anxiety pill before I left the house. I take them on an “as needed” basis, and this seemed like a situation that might cause me great social anxiety or stress as it was crowded and loud. I was worried I would be stuttering, nervous, or really anxious.  Because of my pill, I felt calm, cool, and like nothing could bother me.  Thank God for Clonazepam.

People can criticize those who take prescribed medications, but if you need them and they help, there is no shame in taking them when you need them. It came in handy and had me socializing with people, making great eye contact, chatting, and feeling at ease.  I never felt rushed, nervous, or uncomfortable.  Thankfully, no anxious, obsessive, or negative thoughts came my way.  The first player we met was Frank Winters.  I told him I had seen him at Target in Countryside, and he got a kick out of that.  He was nice and talked with us for a bit. We got a picture with him and his autograph.  He’s a regular and has been at all six Packerpalooza events.

Scott Tolzien was next to meet, and Kevin had said on Facebook that Scott is one of the most humble and down to earth guys. He was definitely right.  He signed my mini helmet and we got a picture with him. He shook our hands and was very nice.  John Kuhn was next.  Kuhn, out of all the players, seemed a tad distracted.  He didn’t stand up for photos and just seemed like his mind was elsewhere.  I don’t want to say anything bad about him, as he was nice, cordial, shook our hands, and took a photo with us, but something just seemed off.  Maybe I’m reading too much into it, but he was the only one that was a little different from the others. 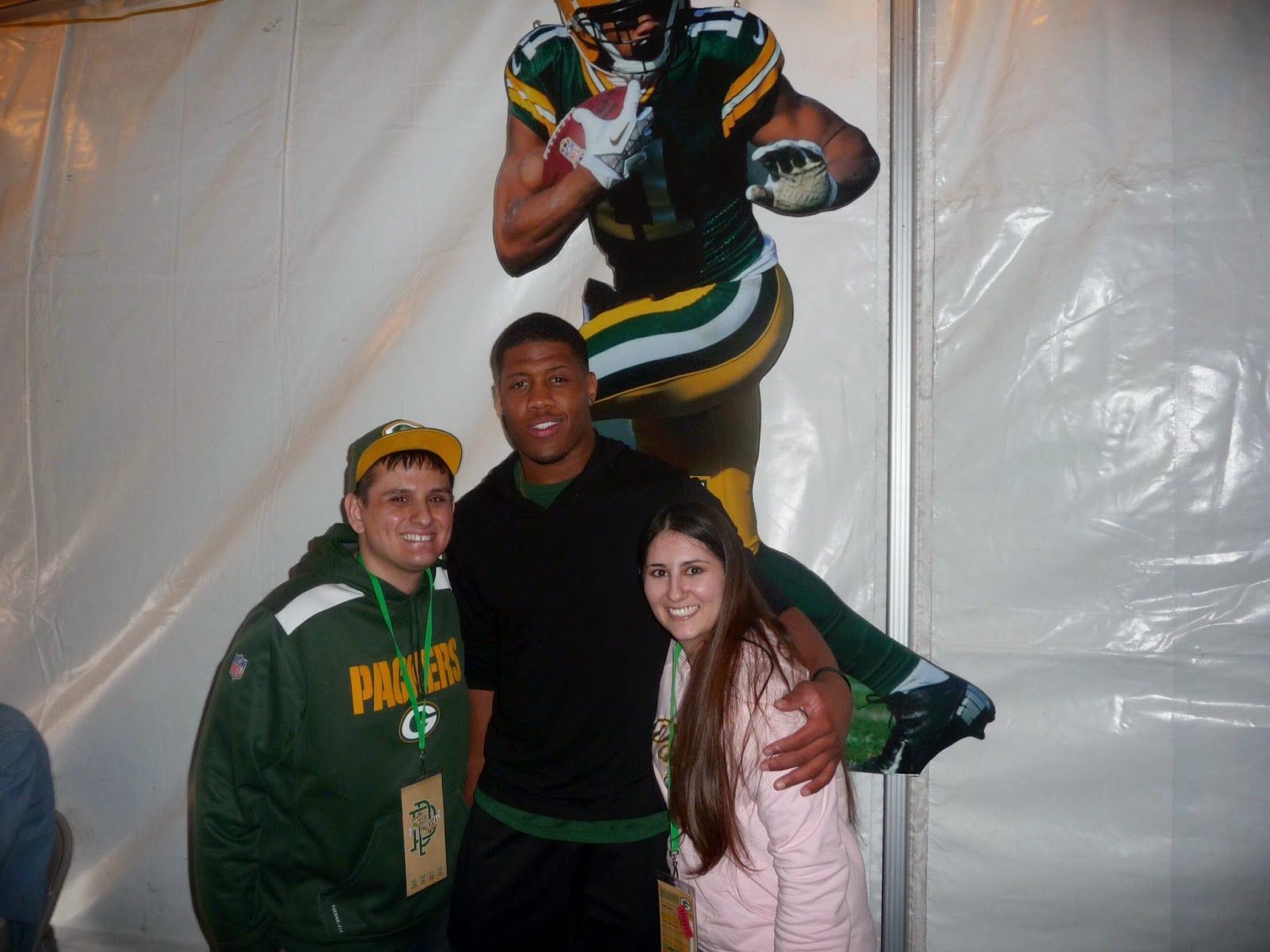 Jarrett Boykin was next, and he was awesome. He stood up for the picture with us, as did Scott Tolzien and wide receiver Myles White, who was a surprise addition to the proceedings.  I told him how I liked his Twitter name.  He laughed and when I came home, I noticed he followed me on Twitter after I tagged him in a photo, which totally made a great day even better. Myles White was last and he was super down to earth, chill, and very happy to be there and meet and greet with fans.  It was nice to be able to meet five players in one day and get all of their autographs and pictures with all of them.  It was truly special.  Amanda and I ended the day with some Panda Express as we were pooped from all the excitement.

It was truly a perfect day.  I got to see Kevin, meet five Packer players and get their autographs, see the Packer Super Fans and get pictures with them, talk to Mean Gene the Dancing Machine, and the whole time, I was calm, cool, relaxed, and handled myself very well socially.  I didn’t stutter, get nervous, feel rushed, or anxious.  I thought I was going to have to ask Amanda to ask the players to sign stuff and for photos, but I was proud of myself for doing it on my own and feeling comfortable and confident.

I enjoyed 2014’s Packerpalooza even more than last year’s and I will gladly be attending every single year.  It is a special bar run by a special man who truly cares about the customers and goes above and beyond the call of duty to make everyone comfortable.  They let you interact and mingle with the players without standing over you and hovering over your shoulder trying to rush you and get you on to the next person.  It is a relaxed, fan friendly event.  I couldn’t have asked for a better time, and I’m so happy Amanda was there to share it with me.  Thank you to Kevin Kruse and everyone at Will’s, including the players and fans, for giving me a day that I won’t soon forget.  Now if you’ll excuse me, I’m going to look at my awesome autographs and pictures for the 100th time as this smile is not going anywhere!